A downloadable game for Windows, macOS, and Linux

In a city where a society of vampires secretly live amongst humans, Ada tries her best to keep her vampire identity hidden. Starting at a new job means starting with a clean slate and Ada is determined to keep this job for once. She tries her best to fit in and stay under the radar. That is, until she slowly begins to fall for her human co-worker. With the duty of keeping her vampire identity a secret, will she be able to confess despite the taboo of a vampire being together with a human? Can Ada even be in a relationship hiding such a big secret from a lover?! Read through this kinetic novel made for the 2017 Yuri Game Jam to see if Ada will end up baring her feelings and secrets, or keep them sealed like a nailed shut coffin!

Team ANPIM is back at it again with your dosage of generic yuri goodness!

This time, half of the team was MIA, but our artist just HAD to take part in this jam because we couldn’t make it for the 2016 Yuri Game Jam :( We started at the beginning of the jam, but ended up giving up half way LOL….. and then decided to pick it back up a week and a half before the deadline, so we made an VN in around a week…… again…... Time seemed to be even tighter this time, but we hope the quality isn't that much of a downfall this time!!

But most importantly, we hope you enjoy another one of our games and be sure to check out our other ones if you haven't already! :)

Hm, kinda crashed after Charlotte revealed who she dated before in the game (that reveal definitely caught me off guard) although I was actually scrolling back up a line so perhaps the game had problems with that. Thankfully the skip button let me get back on track soon.

Edit: actually, I couldn't get beyond that point. Every time I get back there, the game crashes, saying it cannot access a save file or so even though I was just trying to progress through the game. Also Ada's sprite became transparent when I retried. I tried reloading from an earlier save point but I get the same result. Now I'm wondering if the sudden error is actually intentional, but that would be a pretty sudden ending.

Never mind, I checked the video... Yeah that error was too sudden... I thought there was something wrong with me scrolling the history. If your intention was to shock then it certainly succeeded, but I thought we were gonna get like a complete story to see how things unfolded afterwards... Ah well. I did enjoy the office setting though, but the story felt a bit underdeveloped to me.

Sorry to hear about the error you've gotten, not too sure what went on there, Renpy does have its little bugs here and there itself. We'll probably do a re-playthrough of it to see if it happens to us too or if it was just a one-off thing cause this is the first time we've heard of this error :\ Thank you again for trying to playread Secret Satiation and thank you for bringing attention to this bug! We hope you'll enjoy our other VNs more in the future! :)

Oh yeah after a while I did start to think maybe that error wasn't intended, good to hear it confirmed from you. I look forward to your future VNs! :)

hello  :)  here the color version  of my drawing :)  i couldnt find exactly all the same colors but its still ok i think :) 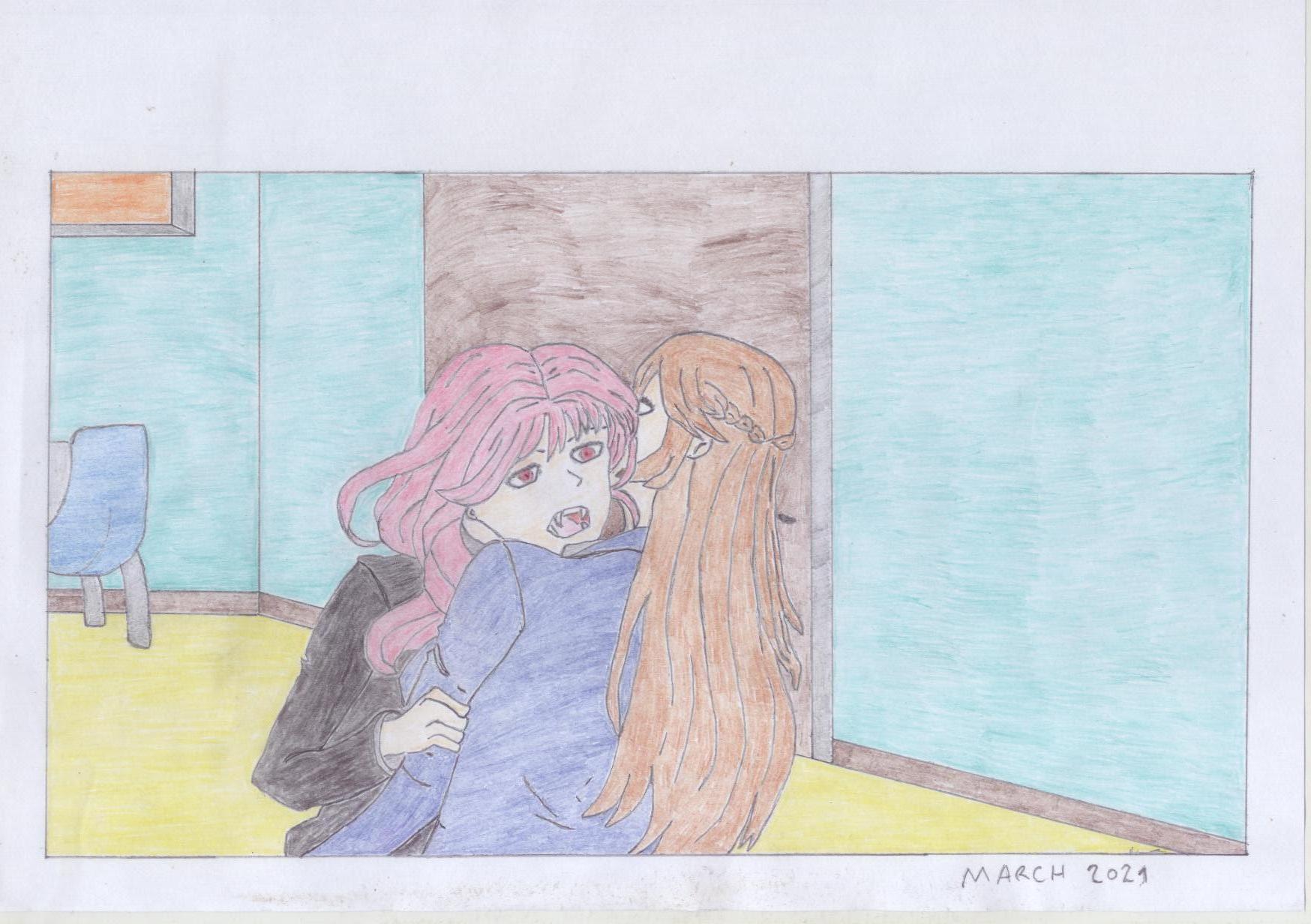 Thank you for the lovely fanart!!! <3

i like Ada her personality is smiliar to mine ,i felt like trying to draw her with charlotte ..i may try to add color to it , it's not perfect but it makes me happy :) 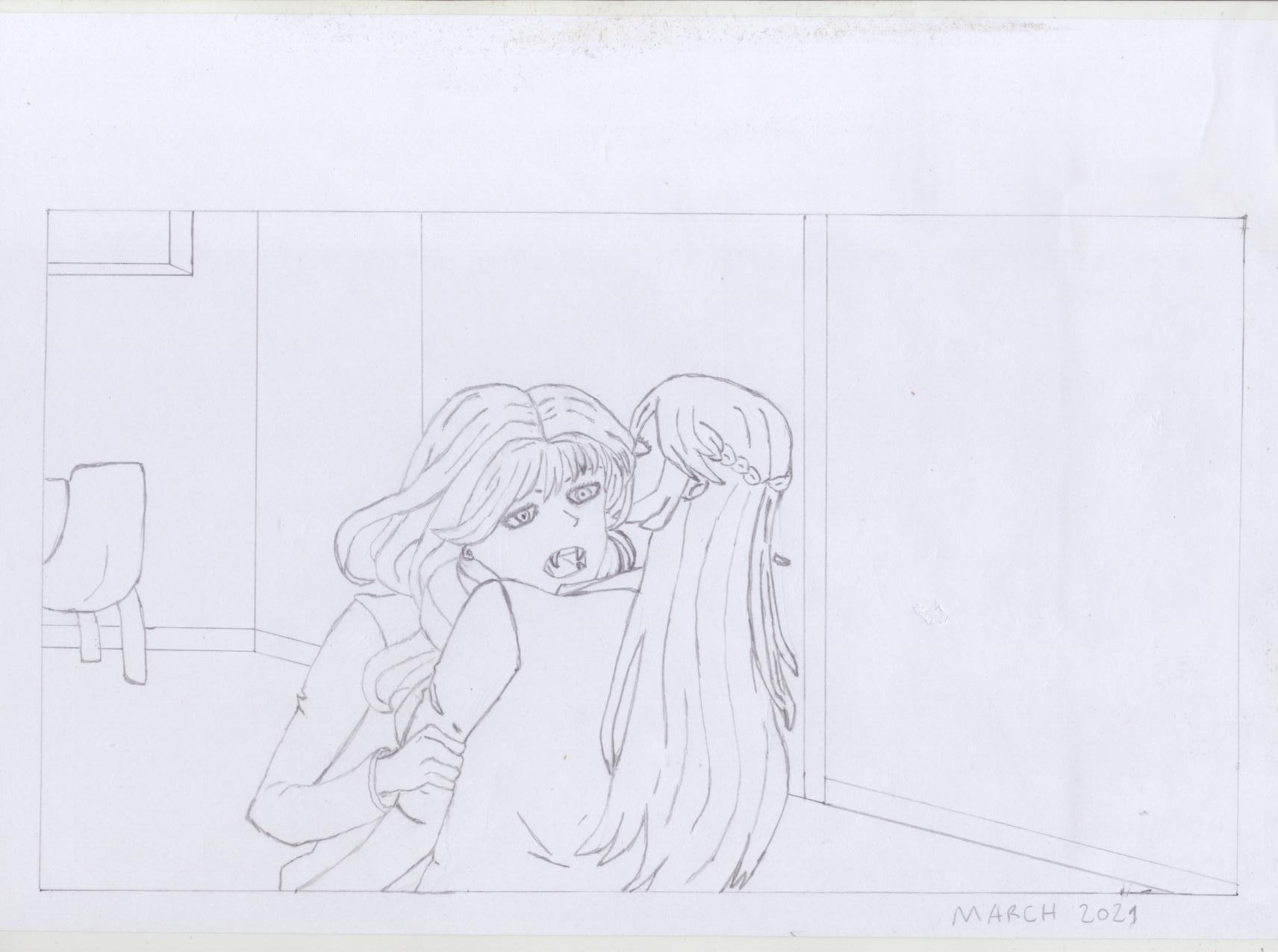 i love this one :)  it's nice sometime a story out of schools stories , i dislike Garlic very much also ..the smell  and the taste  make me feel bad , i avoid that thing even if im not a vampire :D

Thanks for playing so many of our games! Really appreciate it <3

So I decided to try this for the second game from you that I was gonna try and, though I haven't gotten very far yet, I felt an urge to note the Salt to Sugar on the TV screen XD. I haven't played that one either, but just from the blurry outlines I could make out the characters from the game's page.

Haha good eye! Thanks for noticing! We hope you get a chance to play From Salt to Sugar in the near future ; u ;

The end sure was unpredictable Lol
The game was so adorable, I enjoyed it a lot >-<

sooo cute!! the CGs and sprite art are so adorable, and OL romance is my favorite thing.... especially with vampires involved.... a nice, short, well paced VN.

Yessss we all love ourselves some OL romance ; U ; Thanks for playing!!

Thank you so much!! Thanks again for the playthrough video!! <3

Hey wow!! Thanks so much for making gameplay videos of our games!! And I'll thank you for the videos of the other two games here as well! <3 Surprised that you played through the old ones, but super appreciative that you did! Makes me want to revisit them as well haha

I thought I was having problems with the game until I saw your video, since I kept getting an error and the game crashed at the end.

This was a pleasure to read. Although the progression of their romance wasn't as smooth or well written like One's Lonesome, Two's company, it was still a joy to read and it was really cute. The ending was amazing

Haha glad to hear that you liked the ending! Nothing like a good ol' plot twist! (Oops! Spoiler? Haha) Thank you once again for taking the time to read through Secret Satiation as well as One's Lonesome, Two's Company! <3

I really enjoyed this one. Seeing a romance of older girls from Team ANPIM is quite a pleasure. The story is definitely better than N&F and From Salt to Sugar, certainly the writing is getting better and better since One's Lonesome, Two's Company is the same if not much better writing. The art is also a big improvement: less characters but more silhouettes, more facial expressions. The game runs a lot longer than the precious two and that pleases me since ANPIM's games are my favourite, sometimes I wish they were longer but they also would likely work better at this length. The pacing a structure was much more solid than N&F and From Salt to Sugar as well as the character development being much better written and thought out. (Plus the music was so very much better in turns of not being so repetitive

There is one thing that bugged me; the fact that their relationship was never confirmed, no 'we're dating/lovers right' which one's lonesome included. That always makes me a bit sad in yuri when they seem so compatible and it's apparent (or outright said) that they love each-other, but I suppose you can't always get the cherry topping you want.

Thing is, I found this (and the previous two) after having a big urge to go play through One's Lonesome again and realised I had never gone to look at other things by ANPIM so I did and--to my pleasure--found that they had three more games, all promising. I just played through them in order (really wanting to see Kaede's secret in an expansion or something, maybe a senpai she's going out with or something; her character is so charming and fun that I kinda wanna see more of her if ANPIM decide to revisit Salt to Sugar).

More unique premise than One's Lonesome so it gets points there (plus I just love OLs so times that by three or so) but the 'feels' and drama of One's Lonesome are much more... heart throb'y; reckon, I did go giddy and giggly and weird while playing that game as it was the first of it's merit I had read (and still holds it's place for being the best romance VN in my books) so maybe my bridging of these two may be bias (though I did go giddy, giggly, and weird over One's Lonesome again while replaying it a while back and I'm sure again soon). Now that I've rambled on about my love of ANPIM and this game (and strangely a lot about One's Lonesome)... on with a closing!

This will definitely be revisited by me later, great one again from Team ANPIM. 9.8/10 or whatever is really good in the scale. Can't wait for more ANPIM games! Thanks for all the delightful experiences so far~!

We thank you once again for the lovely comment! We're glad to hear the writing is getting better haha. It's definitely one of our bigger weaknesses.

As for Charlotte's and Ada's relationship, we can wholly confirm that Yes, they are together after the VN ends haha. It seems we didn't include that in there huh? Never realized it until now tbh.

Secret Satiation is unfortunately our one and only VN that features non-highschool characters, but we wish to do more older characters in the future some time! And we can't thank you enough for giving One's Lonesome so much love ; u ; <3 We're super grateful and touched that you enjoyed it a lot!

Wow. What a nice little game. Yeah... Maybe it's short but not too short ang long enough to tell the story :)

Well done characters and history of their relation

Thank you soo much! We're very glad you liked it! :) We do hope we can make a game that goes for longer with a more rich story, but we really will have to see about that haha. We can dream! Thank you again for the kind comment ; u ;

aww been waiting for more vn from you guys

Wait no further! We've finally delivered another one! Hope you like this one! :)

This was very cute!!

That ending though hahahaha

Thank you so much!! We're glad you enjoyed it! ; u ; We very appreciate you taking a read through our little short visual/kinetic novel!

And haha! Yes, that ending indeed ;) 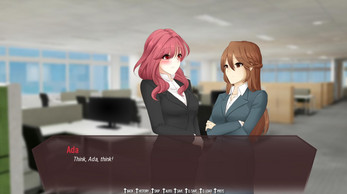 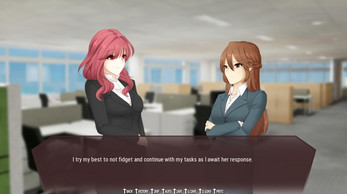 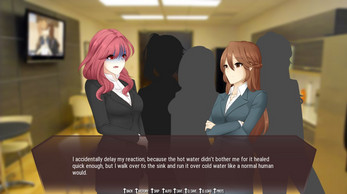